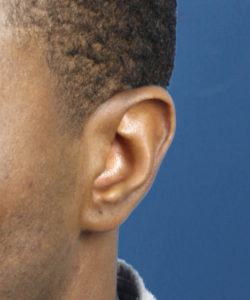 Here is classic case example of Dr. Hilinski’s designer ear reduction technique showing how an ear can be made smaller in size. This patient traveled across the country to have Dr. Hilinski perform ear reduction surgery on him. His main issue – like so many macrotia patients – was the fact the ear appeared too large. This was particularly true along the upper one-third of the ear where the scapha was enlarged. 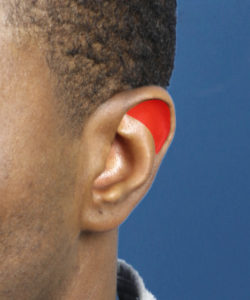 The scapha is the area of the ear that is in between the helical rim and the antihelix. This is shown in the adjacent photo diagram as the red shaded area. In so many patients who have large ears, the scapha is one of the main issues and contributing factors. If the scapha is over developed, as it was in this case, it makes the ear look simply too big for the patient. On this oblique view, you can really see the issue as the top part of the ear appears to extend up and out. Just look at the space that is outlined in red – which can be reduced or eliminated to create a smaller ear.

This is the type of large ear deformity that will not be addressed with otoplasty, or ear pinning, surgery. In fact, so many of Dr. Hilinski’s macrotia ear patients have a prior history of undergoing an ear pinning surgery elsewhere – only to discover that the ear pinning did not succeed in accomplishing the goal of making the ear smaller. In many cases, these patients even underwent more revision otoplasty surgery – again falling short of the desired goal to make the ear look smaller.

That is because traditional otoplasty, or ear pinning, will NOT make the ear smaller to any significant degree. We have been preaching about this online for many years. The only cosmetic ear procedure that will do this effectively is scapha reduction, or macrotia surgery, as offered by world-renowned plastic surgeon, Dr. John Hilinski, to make designer ears. We have patients that fly in to California from literally all over the world to have their ears reduced in size. One week we had two different patients from Australia come to San Diego to have their ears made smaller in size.

This case example presented here is a patient who flew to California from across the country to make his ears smaller in size. As you can see, he is of African American descent. Dr. Hilinski has some of the most extensive experience in the world in making ears smaller – which includes patients from all different ethnicities. This includes African American patients looking to make their ears smaller in size. If you search online, you will be hard pressed to find really any examples of this. But here is one that was performed by Dr. Hilinski over the past year or so. And you can find additional examples of before and after ear reduction surgery by going to our online gallery of beautiful ear transformations.

Smaller Ears Before and After

This before and after of ear reduction surgery is a bit different since the after photos were obtained from the patient (he was unable to fly back to San Diego for additional post macrotia photos). But even accounting for the differences in lighting, you can readily appreciate how the top half of his ear has been made smaller. He no longer has the additional height and circumference that once made up the scapha and helical rim of his ear. After Dr. Hilinski’s amazing ear reduction surgery, the top portion of  his ear has been contracted down in size and now has a gentler curvature. To some degree it almost appear as if the ear was also pinned closer to his head. However, this is an illusion that is often time seen after making an ear smaller in size – it looks like it was brought inward, but, in reality, the ear was just made smaller in size. This is a nice by-product of macrotia ear reduction surgery. Can you see his scars from the ear reduction surgery? No, not really. Although they are there, most patients heal just like this one here where the scars begin to fade away and become barely perceptible over time. Patients are simply left with smaller ears that look more proportional and balanced with the rest of their facial features. 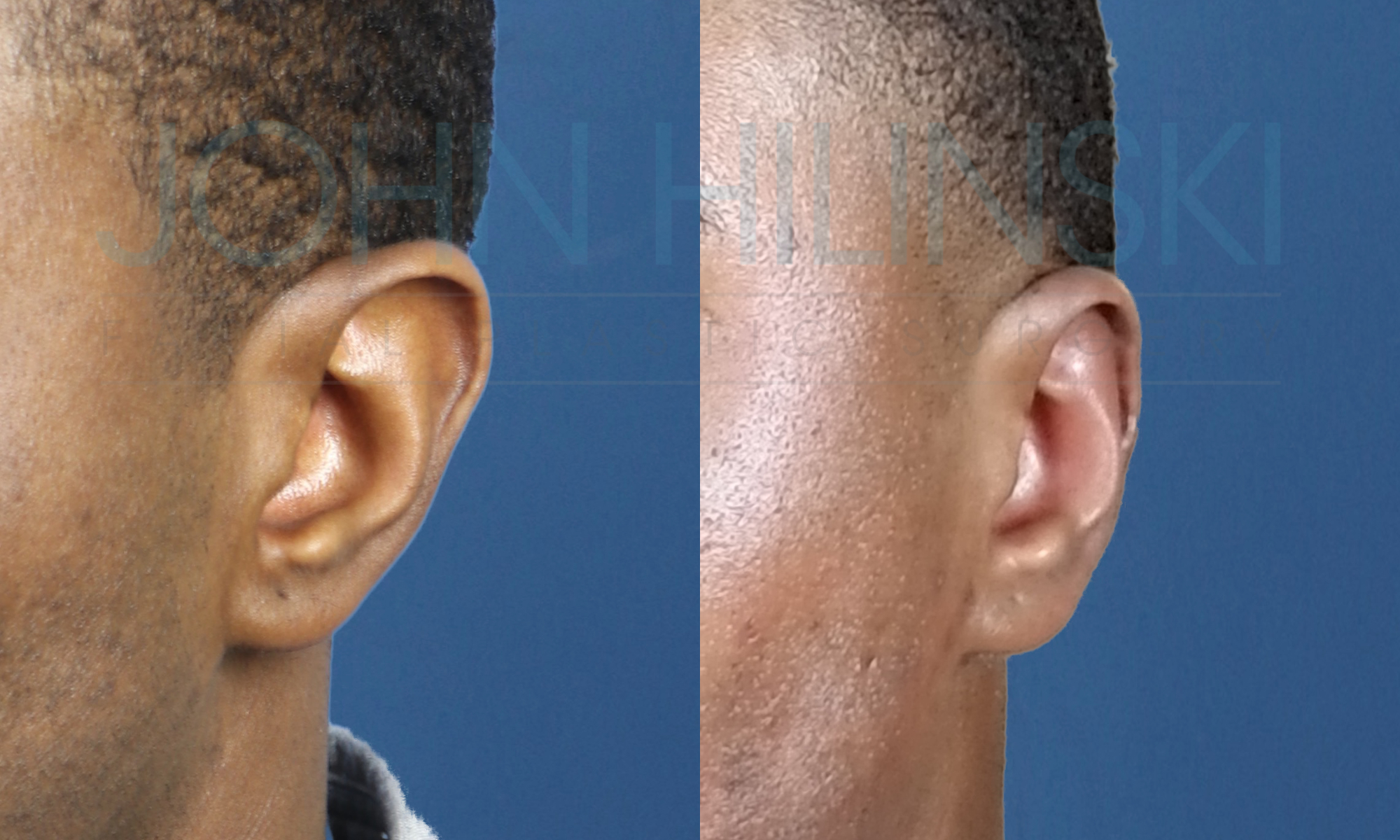